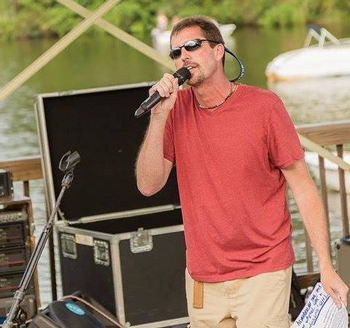 Night Train has been in radio since the age of 15! Many would say his intellect still remains somewhere around that age. Train’s experience includes a 10 year stint in Louisville, Kentucky at the infamous Country WAMZ-FM. He also served as on-air talent in a variety of other markets, most of which still have warrants for his arrest.

Currently, he serves as the Program Director and PMD show host on country format, NASH FM 106.5 (WLFF-FM), along with Operations Manager duties for all of Cumulus-Myrtle Beach.

Night Train is an Atlanta Braves Baseball fan, NFL Football fan of the Tennessee Titans and is primarily known around these parts for his undying passion for Kentucky Wildcats basketball…the best College team money can buy! On most days Train arrives for his programming and on-air duties wearing some sort of UK Basketball shirt along with his “trademark attire”…shorts and flip flops (even when the weather dips below 40 degrees!). Ahhh, the joys of being heard and not seen! Train’s hobbies include hunting, fishing and golf (not necessarily in that order). And he also loves to show off his culinary arts skills in the kitchen while spending countless hours watching the Food Network & the Travel Channel.  However, it should be noted that no one has ever seen him eat.

A true “radio guy”, Night Train loves to work in the dark during daylight hours (hard to separate the radio from the vampire in him) and party well into the dark of night. Many think he’s always in the dark on most things but that’s another story for another time. President of his own Sarcastic Humor Club, Train keeps his loyal listeners laughing all the way home with his own unique “southern Kentucky brand” of humor!